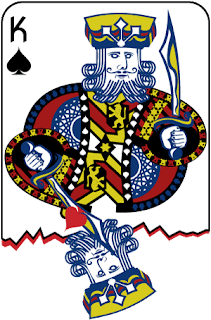 You might be aware of the Netflix series 'House of Cards' based on a British series which has a central character who speaks into the camera, giving a running commentary throughout. What makes it compelling is that his nefarious and shady dealings are contrasted with his earnest and candid account of his actions. It begins with him as a Uriah Heap like Chief Whip with designs on the Premiership and a twisted Machiavellian moral code that excuses his otherwise repulsive behaviour.

In both series a woman becomes ensnared in a power play with the protagonist and pays a very costly price for daring to call the shots. In one of those bizarre prophetic coincidences, its rather spooky how the fall of Michael Fallon (involved in a sexual harassment scandal) should be proceeded by the elevation of the Chief Whip to Secretary of Defence. Any further connections with fiction may or may not surface but what is more poetic is the fall of Kevin Spacey who starred in and produced the Netflix' "House of Cards".

In hindsight its not difficult to see the connection between Spacey and the characters he has played over the years. If you've not seen "The Usual Suspects" I don't want to throw in a spoiler but on top of him playing the part brilliantly and the plot being extremely clever we now have another talking point. It can be difficult watching House of Cards because Spacey's character, Frank Underwood, is both charming and hideous. The justifications for his abominable behaviour stick in your throat and you are left with a depressing feeling of hopelessness.

Over the last few days a real life drama has played out around Spacey. At least he admitted the offence first brought light, even with the caveat that he couldn't remember because he was drunk. But announcing his coming out in the next breath has been denounced as shoddy and pretty much a case of throwing other gay men under the bus. Now that many of his crew in House of Cards have complained about his predatory and unwelcome behaviour we are getting a fuller picture but, depressingly, the shock factor is diminished by it being one of many. The only thing that sets it apart is that the victims are men.

If you watch Alistair Campbell in interview or discussion and then flick back to Malcolm Tucker (played by Peter Capaldi) in "The Thick of It" you get a sense of the power dynamics within government. We are made painfully aware of the preponderance of ineffective and bumbling ministers whenever they are called for interview (we didn't need "Yes Minister" to illustrate that point). We are not always aware of the bully tactics of press secretaries and whips driving agendas in the corridors of power.

Scottish MP Mhairi Black (the youngest MP in Parliament) has done a brilliant job of exposing the musty old boys club that presides in Westminster. She and other female MPs often speak about the archaic misogynistic attitudes that prevail and it has been said that its not surprising there should be a culture of abuse when women are so outnumbered by men. But as much as we need a more diverse House of Commons including women, people of colour, straight and LGBT this is not about men.

Its Not About Men

In any struggle there is a spectrum of views and differing opinions on who or what is the enemy. If there is injustice there must be an enemy that is perpetrating that injustice but to achieve a successful outcome you ultimately have to defeat the generals or strategists rather than the foot soldiers who merely follow orders. The #metoo campaign has rightly challenged the attitudes of men, some of whom accepted the challenge or acknowledged the injustice and pain while others shot themselves in the foot with their naked misogyny but it must go further than that.

From my perspective it was most powerful when stories were told with little or no commentary. Obviously the Harvey Weinstein scandal was the catalyst but every movement has its season and this came on the heals of a growing acceptance that the abuse and exploitation of women must be tackled globally. Liberals and progressives are sometimes accused of hypocrisy when it comes to their agendas. When you have a solid case and a clear agenda its easy to look on those who don't agree with you as bigots and morons. Those on the right can be accused of lack of empathy but it works both ways.

I hate to be put on the spot when being asked to contribute to a cause, especially when being asked for a regular donation. Its not just about evaluating if its a good cause its also about priorities and a sense that I'm doing this because I want to rather feeling any compulsion. The same is true when I considered #metoo. I have no hesitation whatsoever in campaigning for women's rights but there was a sense from some quarters that this was a direct challenge, not altogether positive.

The Womens' March (an illustration)

The Womens' March in Washington was organised largely by women of colour following Trump's election and is about to have its first annual convention. Bernie Sanders was invited to speak, though not as a keynote speaker. This sparked outrage among some feminists, particularly the supporters of Hillary Clinton. Its quite clear that these women see Sanders as an enemy of feminism because they believe he undermined Clinton's presidential race. In their minds it was Bernie who stood between America and its first woman president and by this metric he must be a misogynist even though he has a spotless record of voting in favour of every women's rights issue in Congress. But we in the UK can vouch for the fact that having a woman leader does not, in itself, guarantee any progress in women's issues.

#metoo has undoubtedly had a positive impact and been a challenge to men who might well have been on board with what was being said but benefitted anyway from hearing so many voices in concert. But on its own it would have inevitably faded as we get bombarded with new messages competing for our limited head space and been sidelined by those who don't care to listen.

While I take no delight in the scandals themselves that are now rocking the establishment to its core, its gratifying to see all the pieces falling into place (Weinstein, #metoo, Fallon, Spacey) and houses of cards collapsing. As public opinion is shifting and new structures are being built to replace the established order its both disconcerting and hopeful because no movement succeeded in its mission in and of itself.

If Animal Farm teaches us anything its that power corrupts and simply putting a woman in charge of a corrupt system doesn't bring about meaningful change. I do believe Parliament having a 50:50 split between men and women would be much more healthy but that in itself doesn't get to the root of the problem. Just as corporations are corrupting our politics, economics and environment because of deregulation so men will abuse their power if unconstrained (or even encouraged in many cases).

Democracy is about personal empowerment rather than dictatorship from institutions or individuals. Someone who is personally empowered doesn't need to control others, exercise covert contracts or shift blame. Democracy is also about transparency and accountability.

We currently live in a pseudo democracy where democratic processes are allowed to redecorate our living spaces, move the furniture around and even landscape the garden but not fix the foundations or investigate the cellar. Abuse thrives in such a scenario where we can be preoccupied with the trivial and satisfied with moving the furniture to cover up the damp patches. Progress begins by exposing the ugliness but ultimately relies on fixing the foundations.

I don't believe a radical change can come about by targeting a group even if it comprises half the population. We are all products of our environment and while artificially constructing a positive environment (like communist regimes have) doesn't work, restructuring the foundations goes a long way to fostering a healthy society that builds itself up and works for everyone.

Popular posts from this blog

The naked sand is clothed with an indigo dress
Sequins shimmering and skirts cascading
The bay queen will soon be regaled from Neptune’s wardrobe
And crowned as the sun withdraws to its chamber
For now she takes her throne
In subtle, graceful steps, with little pomp
Another day she will raise her army
And take the rocks by force
Shouting down all who would oppose her
Then retreating with magnanimity and poise
And while the mountain king pushes out his vaunted chest
She dances with the moon in regal beauty
The one who we adore and love
Captivates us with her charms
Reassures us with her rhythmic presence
And terrifies us in her capriciousness
Read more

CoVID-19: Day 19
A friend reached out to me this morning recognising my stress and it hit me. I’d reached information and emotional overload and I was responding to triggers on Facebook — my strings were being played and I was singing like a bird. Fortunately I held it together but I could see why I was feeling adrift last night. Yet I can’t imagine what frontline staff are going through, watching people die, seeing their colleagues fall prey to the virus and being exhasted and ill equipped.

I guess there is some cognitive dissonance at play when we find ourselves as extras looking on as the paid actors play to the camera, acting out their roles as we suspend our disbelief. Its the stage hands and technicians who keep the whole thing going but only get a mention in the final credits which roll as the audience leaves the cinema. If the film set were a battle we would make up most of the casualties, the techicians would be the medical unit, the director and producer would …
Read more

When You Ain't Got That Swing

CoVID-19Day 25
I had an extended Twitter conversation this morning (much longer than usual) with someone I’ve been following for a while and whom I tend to agree with on most things political. Where we’ve diverged is on who we supported in Labour’s leadership election. There wasn’t a great divide in the elections as many members weren’t particularly energised — none of the candidates were very compelling.

With so many people calling for Labour’s first female leader (though Harriet Harman stood as interim leader after Ed Milliband resigned) I’ve been surprised that so many women voted for Kier when there were 2 women leadership candidates. This Twitterer voted for Kier Starmer who she felt would be the most electable when it came to a general election. I had certain re…
Read more

Chris Price
I write because I have to. I design, I build websites, write songs and sing and writing feeds my soul like nothing else.